This year the Grupo Pacha team and, specifically, the team at Casa Pacha Formentera, has worked twice as hard to open its doors. Casa Pacha is more than just a boutique hotel located on Formentera’s longest and perhaps most beautiful beach: Migjorn. It is also the first beach restaurant to be opened by the cherries brand. 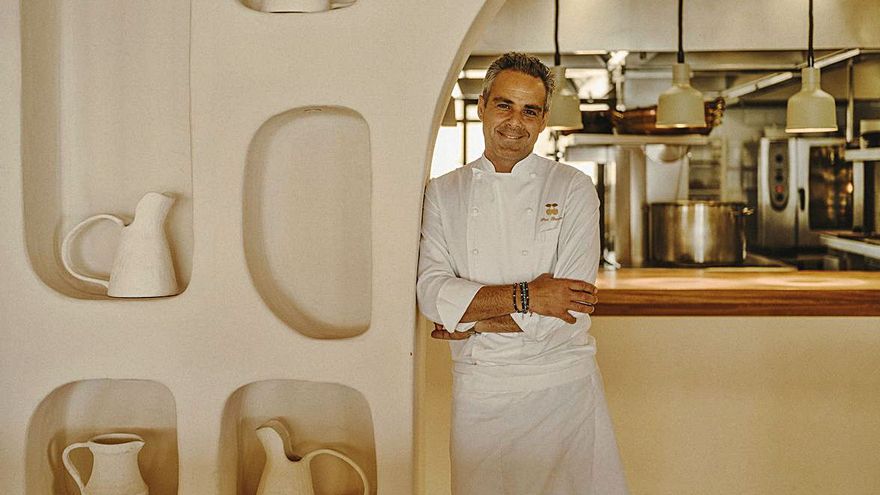 On the seafront and with furnishings reminiscent of an authentic beach bar, you will find a spacious, completely open kitchen run by Pau Barba. He and his team, which also includes Julián González, are in charge of making the dream a reality. 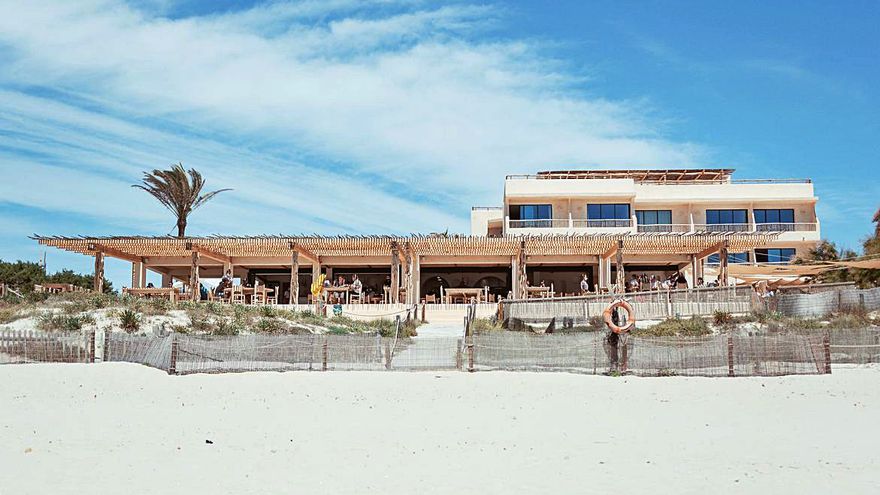 The restaurant of the boutique hotel Casa Pacha is on the beach of Migjorn. ADOLF COMES.

Undoubtedly, the greatest spectacle of their culinary offering is to be found in the locally sourced produce itself, mostly fish and seafood. At Casa Pacha, time stands still and the heart slows, the only thing that causes the diner a slight arrhythmia – but one of pleasure – is each mouthful on the menu. The dishes are prepared in a completely open kitchen. ADOLF COMES.

An incredible smoked salmon with tartar sauce, a sea bass strip with basil and pineapple or some garlic espardeñas with artichokes and egg, it’s a sensation overload! Crayfish from Formentera, grilled or with fried eggs and potatoes? And why not, a sweet rice dish with blue lobster? There are also options for the more carnivorous, such as the half loin of pure-bred beef. And, to finish, although no one would want this to come to an end, warm melted chocolate or Crema Catalana. And these are just some of the options.

Much of the magic is thanks to Pau Barba, voted Best Chef 2020 in Ibiza. He arrived on the island in 2009 and soon after, started working as executive chef in the kitchens of Lío, the Pachá group’s cabaret-restaurant, after having worked in prestigious restaurants with the Torres brothers (2 stars); Àbac (3 Michelin stars) with Xavi Pellicer, and Les Cols (2 stars), with Fina Puigdevall, among others.

At Casa Pacha time stands still and the heart slows down, the only thing that causes the diner a slight arrhythmia, but of pleasure, is each bite on the menu

One anecdote is enough to illustrate his passion for cooking: at the age of 16, when he received money from his parents as a birthday present, he went to dine alone at Neichel, a Michelin-starred restaurant. He put the money he had on the table and asked to try as much as possible from the menu.

In 2014 he stopped preparing the 500 daily meals at Lío to run the small restaurant at the agroturismo Can Domo, which he shares with his wife. In this hotel he has developed his own culinary language.

Now in 2021, he is embarking on a new journey within the Pacha Group, as executive chef and leader of the new Casa Pacha Formentera project.

BLACK FRIDAY| Don’t get caught! 5 tips to avoid getting into debt

Nativ Ibiza Alive is born, a festival committed to sustainability and local commerce

Influencer who reported a 500,000 euro robbery on Ibiza arrested for death threats